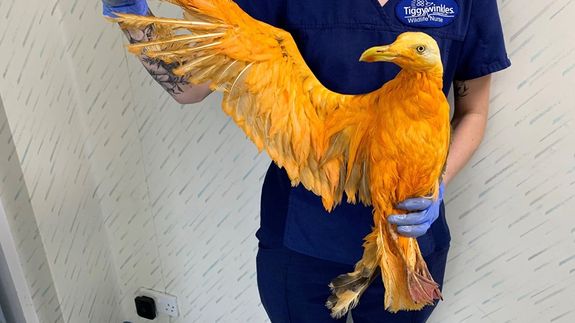 An orange bird saved by passersby and brought to an animal hospital turned out to just be a seagull covered in spices.

The Tiggywinkles Wildlife Hospital in the U.K. saw an especially vibrant avian patient on July 1. In a Facebook post, the hospital said members of the public rescued a bright orange bird from the side of the road that couldn’t fly.

“We had no idea what to expect — and would never have guessed this!” the hospital wrote. The bird, as it turned out, was covered “in curry or turmeric,” according to the hospital.

Aside from smelling a bit “pungent,” the bird was otherwise healthy. Named Vinny, after the Indian dish vindaloo, he’s on the road to being released back into the wild after a thorough bath. Read more…