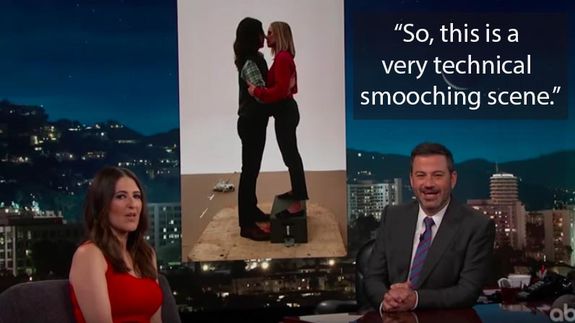 Not much choreography goes into kissing IRL, it’s fair to say. But, on-screen kissing? Turns out it takes a helluva lot of direction to make those smooches look tip top.

D’Arcy Carden from The Good Place told Jimmy Kimmel on Tuesday what it was like filming a kissing scene with Kristen Bell in Season 3. You also get to sneak a peek at some behind-the-scenes footage of the pair filming the kissing scene.

The moment in question is rather complicated. In Season 3, episode 9, Carden plays Kristen in the scene and (stay with me) Kristen plays William Jackson Harper’s character Chidi.

We’re on a rotating table and the director is like, turn your head a little bit, mash your lips together,” says Carden. “It looks like I’m kissing my daughter.” Read more…