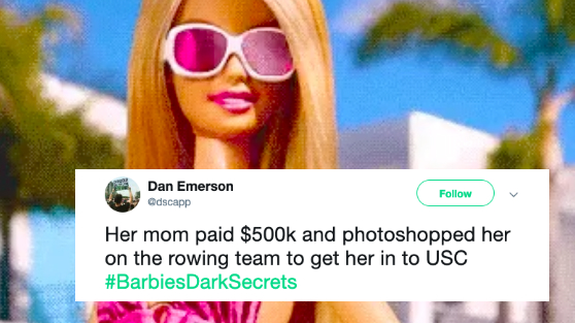 Life in the Dreamhouse isn’t all rainbows and butterflies.

It seems like the latest celeb to have their dark secrets doxxed by the internet is none other than Barbara Millicent Roberts — that’s Barbie, to you. While this icon’s life might be plastic, her background is not quite so fantastic.

The viral hashtag #BarbiesDarkSecrets has all kinds of Twitter users imagining what Barbie might be hiding behind her wholesome image of perfect femininity. Instead of kindergarten teacher or doctor, her careers might actually include axe murderer, demon, and tax evader. Who knew?

There’s a lot to unpack (or unbox) here. The internet just loves taking something usually meant for, ya know, the enjoyment of children, and making it adult-oriented. Whether it’s crass stop-motion YouTube series, photoshoots, or threads like these, everyone’s obsessed with giving good-girl Barbie a bit of an edge. Maybe it’s a cultural critique, maybe it’s just generic edginess.  Read more…